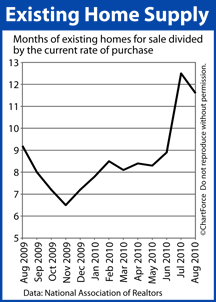 Sales of existing homes in recovered in August, perhaps the result of a post-tax credit normalization.

As compared to July, Existing Home Sales rose 8 percent in August, buoyed by falling interest rates and slow-to-rise home prices. There’s lot of “good deals” out there and home buyers in Chicago are taking advantage.

The housing gains are relative, however. August’s total units sold barely crossed 4 million and still trails the average figures of the last few years by close to 1 million units.

Despite that, the August Existing Home Sales report can be considered a strong one. This is for several reasons:

And, perhaps most important to the housing market market, the number of available home resales dropped by almost one full month last month.  At the current sales pace, the national inventory would be depleted in 11.6 months.

For home buyers, the data presents an interesting opportunity. With average mortgage rates rising from their best levels ever and home affordability cresting in places like Gold Coast , this autumn may represent the turn-around point for the housing market nationwide.

If you’re planning to move in early-2011, consider moving up your time frame.