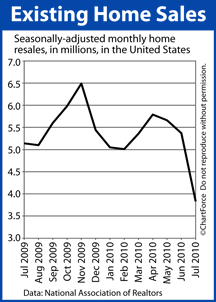 The number of home resales plunged by 1.4 million units in July, according to the National Association of Realtors®’ Existing Home Sales report.

It’s a drop of 27 percent from June; single-family home resales are at the report’s lowest levels since May 1999.

Furthermore, because of the sharp drop in sales volume, home inventories are spiking.

Homes for sale nationwide fell just short of 4 million units in July and, at the current sales paces, it would take 12.5 months for the existing inventory to be absorbed.

For home sellers in Chicago , the Existing Home Sales report is a bit of bad news.  Fewer sales and larger inventories put negotiation leverage in the hands of the buyers which, in turn, creates downward pressure on home prices.  It may also increase time-on-market.

For home buyers, however, the data is decidedly welcome. After a stimulus-driven spring buying season that favored sellers, the summer and early-fall market seem to favor buyers. More choices and more leverage is a positive.

It helps that home affordability is up, too.

Although there’s reports that home values are rising, their modest gains are more than countered by the ongoing rally in mortgage rates. Freddie Mac says that 30-year fixed rate mortgage rates are at their lowest levels in history and, at today’s rates, every one-eighth drop in mortgage rates roughly offsets a 1.5% increase to home price.

Mortgage rates are down 0.75 percent since mid-April.