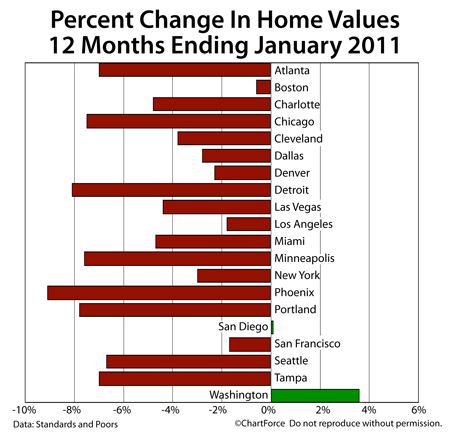 Standard & Poors released its Case-Shiller Index for the month of January this week. The index is a home valuation tool, measuring the monthly and annual changes in home prices in select cities nationwide.

January’s Case-Shiller Index gave a poor showing. As compared to December 2010, home values dropped in 19 of the Case-Shiller Index’s 20 tracked markets. Only Washington, D.C. gained. The results were only modestly better on an annual basis, too.

According to the report, values are down 3.1% from last year, retreating to the same levels from Summer 2003. As a buyer or seller in today’s market, though, don’t read too much into it. The Case-Shiller Index is far too flawed to be the final word in housing.

The index has 3 main flaws, in fact.

The first flaw is the Case-Shiller Index’s lack of breadth. The report is positioned as a national index, but its data is sourced from just 20 cities nationwide.

Putting that number in perspective: the Case-Shiller Index tracks home values from fewer than 1% of the 3,100 U.S. municipalities — yet still calls the report a “U.S. Average”.

A second flaw in the Case-Shiller Index is how it measures home price changes, specifically. Because the index only considers “repeat sales” of the same home in its calculations, and only tracks single-family, detached property, it doesn’t capture the “full” U.S. market. Condominiums, multi-family homes, and new construction are ignored in the Case-Shiller Index algorithm.

In some regions, homes of these excluded types represent a large percentage of the market.

And, lastly, the Case-Shiller Index is flawed because of the amount of time required to release it.

Today, it’s almost April and we’re talking about closed home resales from January which is really comprised of homes that went under contract in October — close to 6 months ago. Sales prices from 6 months ago is of little value to today’s Lincoln Park home buyer, of course.

The Case-Shiller Index can be a helpful tool for economists and policy-makers trying to make sense of the broader housing market, but it tends to fail for individuals in Gold Coast like you and me. When you want accurate, real-time housing figures for your local market, talk to your real estate professional instead.