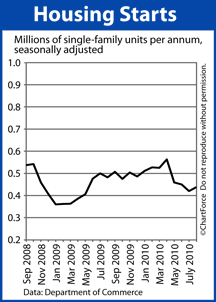 A “Housing Start” is defined as a home on which construction has started and the August increase represents 18,000 single-family units nationwide.

If you only read the headlines, however, you would think the data was stronger. This is because the Housing Starts data is actually a composite of 3 types of homes — single-family, multi-family, and apartments — but  the press tends to lump them all three together.

As a sampling, here are a some headlines on the story:

Now, it’s not that the news is wrong, per se, it’s just not necessarily relevant.  Few home buyers  in Lincoln Park are buying multi-family homes or entire apartment complexes. Most buy single-family and, for the first time since April, single-family starts are on the rise — just not by as much as you’d believe from the papers.

Even still, we can’t be entirely sure that the August Housing Starts data is accurate anyway.

A footnote in the Department of Commerce report shows that, although single-family starts are said to have increased 4 percent, the data’s margin of error exceeds its actual measurement, meaning the data has “zero confidence”.

In other words, starts may have dropped in August, but it’s something we won’t know for sure until revisions are made later this year.